A work of art incorporating rebelliousness, revolution, paradox; distortions of space and time, logic, size, and proportion; disbelief in conventional reality; assimilation of dreams, wordplay, and the ineffable nature of childhood. – Mark Burstein on ‘Dodgson and Dalí’

In 1969, Random House commissioned surrealist painter, Salvador Dalí, to produce 13 illustrations, 12 in full colour, for a new edition of Lewis Carroll’s Alice’s Adventures in Wonderland. The unity of Carroll’s ability to deliver an unconventional fairy-tale and Dalí’s ability to push the limits of reality was an ingenious pairing.

Alice’s Adventures in Wonderland is without question one of my all time favourite books. Written by Charles Lutwidge Dodgson (1832-1898), better known as Lewis Carroll, this story is about all the wonderful things that can happen in a dream, in an imagination, or in an alternative universe where anything is possible and morality is challenged. This is a story book of which I have acquired many editions, including Vintage Classics 150th Anniversary edition, with a introduction, cover and endsheets written and designed by Dame Vivienne Westwood; Harper Design’s 2010 edition with illustrations by Camilla Rosa Garcia; Barnes & Noble’s Leatherbound Classic Collection (2010); Firefly books’ 2010 edition with illustrations by Ralph Steadman (originally produced in 1967); and my most treasured edition, The British Library’s 2008 Alice’s Adventures under Ground: A Facsimile, which contains the original handwritten manuscript and illustrations by the man himself.

For many years I have coveted the edition illustrated by Dalí, an edition which you would have to pay a considerable sum to obtain. Yet, in 2015, to celebrate the 150th Anniversary of this incredible book, Princeton University Press released the novel. The edition reintroduced the most authentic text, separate from Alice’s Adventures under Ground. The reproduced text was originally published in the ‘eighty-sixth thousand’ Macmillan edition of 1897. It celebrates the anniversary with 20th century art by one of the most notable masters of Modernism, and a leading member within the Surrealist movement, Salvador Dalí. (Though, for me, it would have been more authentic to use the text from the facsimile edition, as the words which have been changed are very minor revisions and add nothing to the original text.)

This 150th anniversary edition contains an introduction by Mark Burstein, Lewis Carroll Society of North America (LCSNA) President Emeritus, who explores the link between Dalí and Carroll. He describes Dalí’s artworks for the book as being ‘not so much to translate a literary text into another medium as to provide a complementary experience, one in which Alice herself is not really involved and very few characters are depicted’ (Burstein: 2015, xiv). Art historian Victoria Seers describes the images as ‘unsettling shadows and odd juxtapositions make for sinister ad sometimes frightening images. His Mad Tea-Party is not an intelligible image at first glance. But slowly the individual images come together and the scene becomes apparent’ (Winter: 2007, 7).  What more could you want from Dalí? Burstein also suggests that Dalí’s work with John Hench in the mid-1940s may have influenced Walt Disney’s vision of Alice in Wonderland, which certainly puts a new perspective on the movie.

At the end of Burstein’s introduction, he references the mathematical influence in Dalí’s work, most notably recognisable in works with a religious context, and links this, albeit tenuously, to the fact that Carroll was a mathematical lecturer at Christ Church, Oxford. Moving forward, Burstein introduces the reader to Thomas Banchoff, Professor Emeritus of Mathematics, at Brown University, who elaborates on Dalí’s interest in science and mathematics. He details his own experiences in conversation with Dalí, which spanned many years, with wonderful and enlightening anecdotes. However, it doesn’t really marry Dalí and Carroll.

Those many of us who have coveted the original now have chance to own an edition which combines 19th Century literature with 20th Century art in a 21st Century publication, although Princeton University Press did miss an opportunity to do something classic yet modern with the front cover, resulting in some confusion of layout regarding the title and the way it trails around the bottom corner without clear context.

In 1935, Dalí completed an artwork entitled The Nostalgic Echo, which depicted a young girl skipping a rope. In 1936, Dalí reused this girl in a piece called Landscape with a girl skipping rope, and in 1969, when Random House approached Dalí with a commission to produce numerous artworks for a story of a young girl who goes on a dream-like venture, it seems apt that Dalí would revitalise this girl and bring into his works once more. It is this little skipping girl which ties the images together, and which are used as a motif, to separate scenes within Carroll’s story.

Whether you’re a fan of Dalí or Carroll, or both, this edition is an incredible item to own, and it feels like an honour to have such astonishing images alongside a timeless tale of a young girl’s dream.

Frontispiece for Alice’s Adventures in Wonderland, illustrated by Salvador Dalí 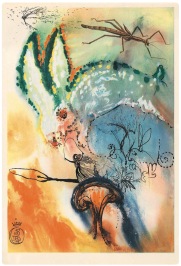 Down the Rabbit Hole, illustrated by Salvador Dalí

The Pool of Tears, illustrated by Salvador Dalí

A Caucus-Race and a long Tale, illustrated by Salvador Dalí

The Rabbit sends in a Little Bill, illustrated by Salvador Dalí

Advice from a Caterpillar, illustrated by Salvador Dalí

Pig and Pepper,illustrated by Salvador Dalí 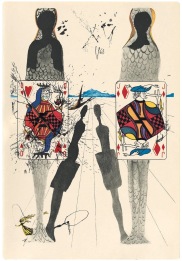 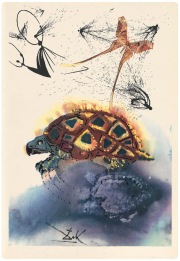 Who stole the Tarts?, illustrated by Salvador Dalí

Rachael ‘Gracie’ Carver moved to Norwich from Staffordshire, via Essex. She studied Design for Publishing at the Norwich School of Art and Design, and graduated with a First-class degree (with a principal's commendation) having completed a dissertation on the art and artefacts of Pompeii. She is currently Head of Design at a craft company based in Leicester. She has a significant interest in popular culture and you can find more of her writings on her blogs: Vermilion Goldfish Art Blog, Inked on Culture and The Inked Crafter. In short, she is a Music Obsessive, Ink Addicted, Crafter, Designer, WWE Nerd, with a wonderful husband and son, and three cats: one who is grumpy, one who is stupid, and one who is cuddly and secretly the family favourite. View all posts by Rachael Gracie Carver